Rajinikanth and Nayanthara's second single from Annaatthe will release on October 9 at 6 pm.

by shatakshi
in Music
0

The second single of Rajinikanth and Nayanthara’s Annaatthe, Saara Kaatrae, will release tomorrow (October 9) at 6 pm.

Sun Pictures, the production house, took to Twitter to announce the same with a new poster featuring Rajinikanth and Nayanthara. 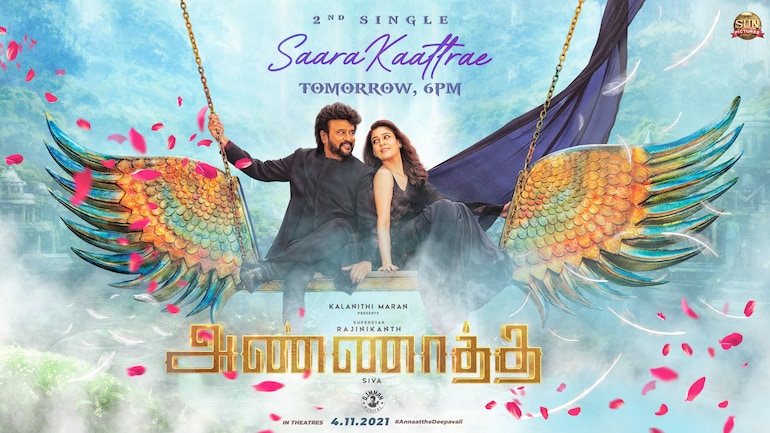 About the second single

The second single is named SaaraKaattrea. The song stars Rajinikanth and Nayanthara, two of the most lovable celebrities of South India. The singers of the SaaraKaattrea are Sid Sriram and Shreya Ghoshal.

The announcement came with a big surprise poster featuring Rajinikanth and Nayanthara in black attires.

The first single of Annaatthe

The introduction song of Annaatthe titled, Annatthe Annaathe, released online on October 4. The peppy song, composed by D Imman, was sung by SP Balasubrahmanyam AKA SPB. The song was SPB’s last song before his demise in 2020.

From the latest poster, it is clear that Nayanthara is paired opposite Rajinikanth in Annaatthe. It is rumored that Keerthy Suresh will play his sister. Meena and Khushbu’s roles in Annaatthe have been kept under wraps. It is a rural entertainer.

Directed by Siruthai Siva, Anaatthe is produced on a massive scale by Sun Pictures. The film is all set to release in theatres on November 4. The actors have finished dubbing and the editing is currently underway.

The project is produced by Sun Pictures.  Endhiran and Petta are Rajinikanth’s and Sun Pictures’ other collaborates.

The much-awaited first look and the motion poster featuring Superstar Rajinikanth was launched on Friday (Sept 10) on the occasion of Vinayagar Chaturthi. Both the posters garnered massive responses from the audiences and critics as well.

A. R. Rahman soundtrack for Mimi gets submitted for 64th Grammy Awards

The teaser of the first song of Sooryavanshi is out !!!

IPL 2021: "It's been a great ride. My family and I are going to miss you all"- David Warner post emotional note

Apple announces iPhone 13, Here’s all you need to know